It was a disaster that shook the whole world. The sinking of the RMS Titanic was undoubtedly one of the most famous and most notorious maritime disasters around the world. Of the 2,224 people on board the Titanic, only around 710 survived. The Titanic story has played a prominent role in popular culture since her sinking and has been subject to countless media portrayals over the years with 24 films made and 26 television episodes dedicated to the disaster.

The Titanic and her story also plays a significant part in the history of Liddell. William Liddell & Co was the preferred supplier of bed linen, table linen and bath linen to the Oceanic Steam Navigation Company, owners of the White Star Line. As such, the Titanic set sail across the Atlantic Ocean with the finest Liddell linens on board.   Liddell was founded in 1866 , on the banks of the River Lagan, Belfast; a stones throw away from Belfast and the very shipyard where the infamous ocean liner was made. Whilst William Liddell and his staff were busy creating our luxurious and traditional linens, the dockyard workers were busy crafting the Titanic just a little further down the river.

With our rich heritage and deep-rooted connections to the Titanic, we’ve investigated some of the little known Titanic facts and her story.

We all know the story of Rose and Jack. But in reality, the passengers on board the Titanic included some notable and prominent people within society at that time.

Colonel John Jacob Astor IV was an American businessman and richest person aboard. The Astor’s were one of the wealthiest families in the United States and were dubbed ‘America’s first aristocrats’. JJ Astor was 48 years old when he boarded the Titanic at Cherbourg along with his pregnant wife, 18-year old Madeleine.

Whilst his wife Madeleine survived the sinking, JJ Astor did not. He was identified by the initials that were sewn into his jacket along with possessions found on him.

Isidor Straus was an American businessman who co-owned Macy’s department store along with his brother, Nathan. Isidor was travelling with his wife Ida when the iceberg struck the ship.

Ida refused to get into a lifeboat without her husband and the couple was last seen arm in arm, on deck. They both died during the disaster however Ida’s body was never found.

Dorothy Gibson was an up and coming 22-year old singer and model who was also on the Titanic voyage. On the 15th April 1912, Dorothy boarded one of the 20 lifeboats and was rescued by the RMS Carpathia.

She then went on to star in the first film about the event, Saved From The Titanic, which was released only one month after the sinking.

Wallace Hartley was the bandmaster and violinist of the eight-member band on board the Titanic. As in the film, Wallace and the other members continued to play music upon the deck as the ship went down. They all died in the sinking.

Wallace hailed from Colne in Lancashire, not far from Vision’s historic mills and current headquarters, and around 40,000 people lined the streets on the route to his funeral in his hometown.

Charles Joughin was the Titanic’s Chief Baker. After being tasked with delivering food and drink supplies to those aboard the lifeboats, he returned to his cabin where he enjoyed a significant amount of alcohol. He then returned to deck where he threw approximately 50 deckchairs overboard to give those in the water something to hold on to.

The last survivor to leave the Titanic, Charles survived the freezing water for two hours before being rescued. He credited the alcohol he had consumed earlier with his survival and ability to keep warm. Contrastingly, almost all of the people in the water died within 15 -30 minutes, mainly due to cardiac arrest or other reactions to freezing water.

Violent Constance Jessop was a stewardess and nurse. In 1910, she began work as a stewardess on the RMS Olympic, one of Titanic’s sister ships. In 1911, Violet was on board when the Olympic collided with a British warship. Despite the damage, the ship made it back to the port without sinking.

On the 14th April 1912, Violet was also onboard the RMS Titanic when it hit an iceberg and sank in the North Atlantic Ocean. Violet boarded a lifeboat and was later rescued by the RMS Carpathia.

In 1916, whilst serving for the British Red Cross aboard the HMHS Britannic, another of the Titanic’s sister ships; an unexplained explosion in the Aegean Sea meant that the Britannic, too, sank.

Violet survived all three incidents and later went back to work for the White Star Line in 1920.

R. Norris Williams, a promising tennis player, was one of the last people to leave the Titanic. After being washed overboard, he found a lifeboat, along with several others and clung to its side before getting in.

Upon being rescued by the RMS Carpathia, the doctor on board wanted to amputate Richard’s legs due to them being so severely affected by frostbite. Richard declined due to his tennis career. Later that year, he won his first US Tennis Championship.

The youngest person on board the Titanic was aged two months and 13 days. Millvina Dean was a third class passenger who survived after being placed into a lifeboat with her mother and brother. The oldest person on board was third-class passenger, Johann Svensson who was 74 years old. He died with the sinking of the ship and his body was never recovered.

14 of the passengers on the Titanic that evening were from a small village called Addergoole Parish, Ireland. Tragically, whilst three survived, the remaining 11 from the tiny parish died in the sinking. Being from a village with a population of only 200, the loss in the community was huge.

Since 2002, they have rung the church bells at 2.20am every year on April 15th where they let out 11 sombre rings followed by three cheerful ones to commemorate the Titanic tragedy and pay their respects.

Contrary to popular opinion, the Titanic was not filled to capacity. The maximum capacity of the ship, including passengers and crew, was 3,547 however the actual number of people on board was 2,222.

The ‘unsinkable’ ship; it was undoubtedly an ocean liner of gigantic proportions. But just how big was the Titanic and what went into building her?

As well as the thousands of people on board, there were also rumoured to be many animals, some of which also perished in the tragedy.

Although not entirely clear, there was thought to be around 12 dogs on board according to passenger testimony. The dogs weren’t included on passenger lists and so the real number may have been much higher.

Of these dogs, one was an Airedale Terrier named Kitty, owned by John Jacob Astor, a champion French Bulldog bought for £150 (or £12,575 nowadays) and a toy dog called Frou-Frou who was considered ‘too pretty’ to be placed in the kennels with the other dogs. The dog owners had been planning on holding a dog show later on if the Titanic’s voyage had continued. Three dogs, in all, made it off the Titanic on the night of the sinking – two Pomeranians and one Pekingese.

One passenger brought four roosters and a number of hens aboard after having them imported from France whilst another passenger brought a yellow canary on board; along with its own ticket, which cost them 25 cents.

It was commonplace to have a cat onboard a ship in the days of the Titanic as they were considered good luck charms and also helped to control the rat population. Titanic’s cat was called Jenny. There are conflicting stories as to whether Jenny died in the disaster; some recall seeing her leave the Titanic with her newly born kittens at Southampton whilst some versions of the story say Jenny, and her kittens, went down with the ship. 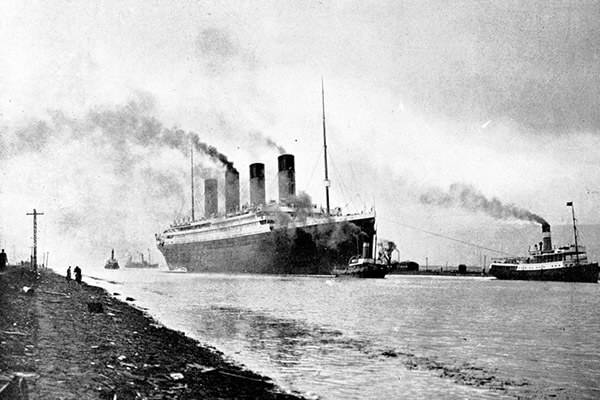 Many of the crew of the Titanic died in the sinking; including the captain Edward Smith. Of the 908 crew members on board, 696 died – a higher death rate than even those in third class. 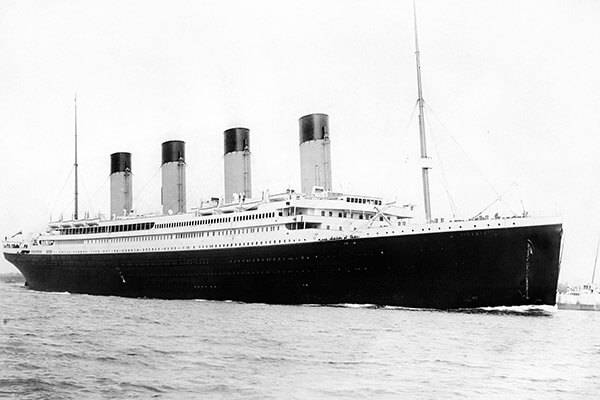 Also, the way people were woken by the stewards differed greatly depending on the class they were in. The stewards in first-class helped the passengers get dressed; put on their life jackets and escorted them out on to the deck. In second-class, the stewards threw open the doors and told people to put on their life jackets whilst in third-class, passengers were mainly left to their own devices after being told to come to deck.

A ship of Titanic’s proportions had to include many items of food, cutlery and tableware to satisfy the thousands of guests enjoying the culinary delights on board. But exactly how much did she hold?

More than 6,000 meals were prepared each day aboard the Titanic. The main galley, which served food to the first and second-class passengers including a number of serving pantries, a butcher’s shop, a bakery, vegetable kitchens, storing rooms for silver and china, specialised rooms for holding wines, beers and oysters and a number of storage bins needed for coal to fuel the 19 ovens. A typical first-class meal could include up to 11 courses and would usually take four to five hours to consume. It would include delicacies such as foie de gras, peaches in jelly and a Waldorf pudding – the recipe for which remains unknown and could have been created exclusively for the White Star Line ocean liners. During the meals, guests were given a music book containing around 352 songs; the musicians on board were expected to know them all in case of a request. Contrastingly, third-class meals would include hearty stews, vegetable soups, boiled potatoes, biscuits and fresh bread.

The last ever first-class feast on board the RMS Titanic consisted of raw oysters and assorted hors d’oeuvre followed by a choice of veal stock or cream of barley soups. Next, they dined on poached Atlantic salmon, and then either filet mignon, sautéed chicken, lamb with mint sauce, roast duckling or sirloin of beef. Mid-way through the meal, guests were given a palate cleanser and resumed the mammoth meal with a roasted pigeon. For dessert, they enjoyed peaches in jelly, chocolate and vanilla éclairs, pudding and ice cream. Then, they’d be given an assortment of fruits, nuts and cheeses followed by coffee, port and cordials.

When the ship arrived in Southampton on the 3rd April, there was much work still needed to be done before she could set sail on the 10th. The work began to stock the vessel with all of its linen, bedding, cutlery, food and tableware as well as beginning to load her up with the huge amount of cargo. In preparation for the maiden voyage, there were countless people still fitting the ship whilst she was docked in Southampton tool: fitting carpets, hanging curtains and painting.

Because of a recent coal strike, there was huge demand for coal before the Titanic set sail and many sea journeys were cancelled. The White Star Line had to use coal from its other liners and transfer it to the Titanic to ensure she was ready to go on the 10th April.

The ship also boasted huge amounts of tableware, glassware and cutlery; 1,500 champagne glasses, 2,000 wine glasses, 3,000 teacups, 1,200 teapots and around 2,500 water bottles. Almost 200,000 individual items of laundry went aboard the Titanic. With the exquisite Liddell linen being a huge part of this final number, the manifest lists around 7,500 bath towels, 3,600 bed covers, 25,000 fine towels, 6,000 table cloths and 45,000 table napkins which made up a large part of the ships vast array of linen including around 40,000 miscellaneous items. 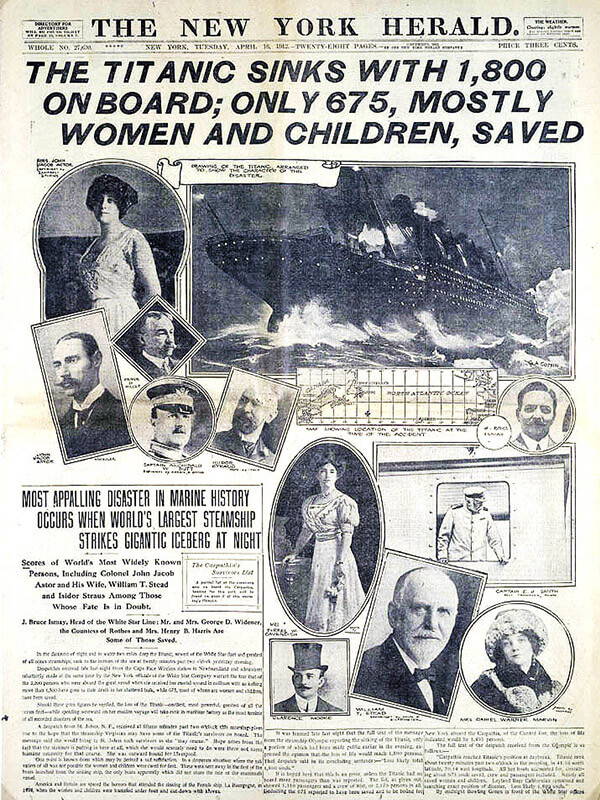